Asbestos Exposure at Fires Can Cost Firefighters Their Lives 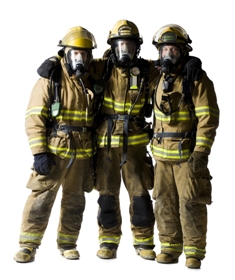 When most people think of the dangers firefighters face, they probably think of being burned in a fire or dying from serious smoke inhalation. While these are risks firefighters face on a daily basis, there is a hidden danger to their health lurking in the fire’s flames—asbestos. Sadly, exposure to asbestos in fires is a very real hazard for firefighters and the result is that they can develop cancers and other debilitating diseases that are often fatal.

Where Asbestos Is Found

Asbestos is a naturally occurring mineral that was used widely due to its flame retardant and insulation properties until the late 1980s. At that time, it was phased out, but not banned. Even with this phase-out, millions of pounds of asbestos are still used annually in the United States. Common building materials that contained asbestos include:

It is also found in some products that are being manufactured now, such as roofing felt, vinyl floor tiles, cement shingles and pipes, roof coating materials, and corrugated sheet.

How Are Firefighters Exposed to Asbestos?

When firefighters must work in older buildings built before the 1980s, they are most at danger of asbestos exposure. When asbestos burns, it can easily break apart and become airborne. Firefighters can inhale large quantities of fibers or dust without even realizing it. The most dangerous part of firefighting can be once the fire has been controlled and the firefighters are searching for hotspots. This is because they often take off their protective gear and expose themselves to hazards.

The Risk of Secondhand Asbestos Exposure

Firefighters may not realize that their families are also in danger of developing these deadly diseases. Family members can be exposed to secondhand asbestos exposure when firefighters bring the small fibers home on their clothing and skin. To protect their families, firefighters should always clean up and change into fresh clothing before going home if there is any risk that they were exposed to asbestos.

Unfortunately, there is no law in New Jersey—unlike other states—that assumes that exposure to certain toxic substances like asbestos cause cancer. This means that you will most likely have to fight to prove your illness was caused by your job as a firefighter. That is why you need an experienced workers’ compensation attorney on your side. If you developed one of these illnesses from asbestos exposure or another injury on the job, call us toll free at 877-360-0183 to schedule a free consultation.